“Are you tired? Worn out? Burned out on religion? Come to me. Get away with me and you’ll recover your life. I’ll show you how to take a real rest. Walk with me and work with me—watch how I do it. Learn the unforced rhythms of grace. I won’t lay anything heavy or ill-fitting on you. Keep company with me and you’ll learn to live freely and lightly.” Matt 11:28-30

I remember when the conversation began years ago.  I felt frustrated, as if someone was telling me the world was round when I could clearly see that it was flat.  I wanted to see what they saw, I wanted to understand, but I didn’t.  I didn’t see that my whiteness gave me privileges that their blackness didn’t.  I couldn’t conceive that there could be this massive invisible thing that existed if I couldn’t see it.  I even felt somewhat attacked by people of color for being white and having these supposed privileges. Oh the irony.

Fast forward many years to today.  Thankfully, I took this issue to the Lord and asked him to show me…to show me what I couldn’t see on my own.  Not surprisingly, that’s when I began to hear them.  People of color that I know personally began speaking out about their own experiences.  They told of unfair, unkind and even cruel treatment by others who didn’t know anything about them except the color of their skin.  It began to open my eyes.  And it was hard. Hard to realize that this racism had been here all along… in the world I live in?!  Hard to realize the pain and death that has been unjustly handed out to those not born white.  Even harder to watch it persist.  I  wondered if I had unknowingly contributed to this dysfunction somewhere along the way.

But I was also grateful… and I continue to be grateful.  I am grateful to see it now, even if I only see in part.  I am grateful to now have the chance to teach my children about it, and be a voice for truth and love in the places God gives me to be his light.  I am grateful for those voices that kindly, but firmly spoke the truth about the differences in their lives and mine.  I am grateful they did not give up and retreat to silence.

In processing all of this, I wrote a song.  While the lyrics are at the bottom of this post, I wanted to explain them a little.  The first verse is about my non-white brothers and sisters who have had to endure the brokenness in a way I have not. They have been crying out for so long, through tears, hurt and anger, to try and tell me their story.  The second verse is my perception of some of the white community’s reaction.  We have refused to see it for so long.  Instead of opening our hearts and minds to the possibility it is true, we have retreated in fear, which is the opposite of love.  If our white voices have privileges that currently many non-white voices don’t, then it is our voices that must speak up, in harmony with our non-white brothers and sisters.  Instead our “mighty” voices often go strangely silent at a time when they are needed most.  The chorus speaks about the story in the gospel of John where Jesus stands up for a woman caught in sin.  Jesus could’ve not involved himself.  He could’ve left her to her punishment, as she was caught in the act, and therefore deserved punishment.  Jesus did neither of these.  Instead he put himself in between the stones and her.  That’s the same thing he did for me.  And you.  He could’ve left me in my sin, in my mess.  But he didn’t.  God is love, and love is what he did.  As a result, he could’ve easily been caught in the crossfire of some stones.  He probably lost some friends or followers that day.  He counted her as more valuable than any possible personal pain.  He stood up for the one that couldn’t stand up for herself.  He calls us to do the same.

God, you healed literal blindness when you were here on Earth.  We believe this and know that you can heal our blindness when it comes to racism in our country.  Father, we know that we can trust you because you are good and you love us deeper than we can imagine…so we can trust you when we ask you to open our eyes.  Open our eyes to the truth of the world around us.  Open our eyes to our part in it.  Break through our pride and our idol of comfort…bring us to life-giving repentance.  We are all created in your image and we would all be hopeless and worthless without you.  Thank you for stepping between the “stones” of condemnation for me.  Thank you for sticking up for me when no one else would.  Make me like you Jesus.  Give me your eyes.  Give me your heart.   Amen.

Video of the original song, “But You”

Broken-hearted, tears are falling all around

Feet are scrambling, hands are grasping…now

A people was, a people is, crying out

But you, you stepped between

All those stones and me

Yes you, made blind men see

Will you, do the same for these?

News is mounting, fear is rising…here

A people was, a people is, passing blame

But you, you stepped between

All those stones and me

Yes you, made blind men see

Will you, do the same for me?

So throw off my pride,

And take a good look inside

In a comfortable life 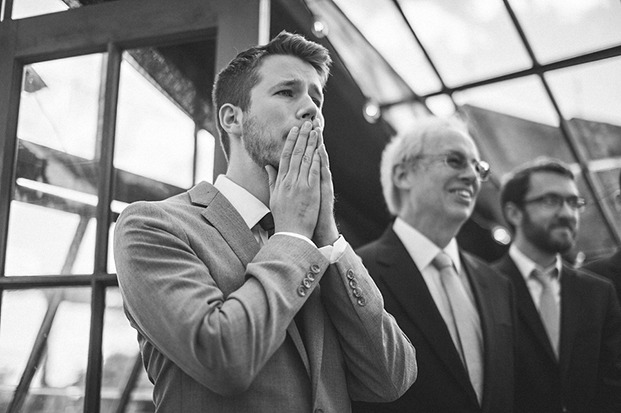 Have you ever been to a wedding?  Of course you have, we’re all normal, non-weirdos here…right? 😉  So, at these weddings, what is your favorite part?  The beautiful scenery?  The free food?  Maybe the open bar?  If you’re a parent, it’s quite possibly getting a break from your lovely, but needy kids?  I too love all of those things, but my favorite part is watching the bride walk down the aisle while sneaking a peak at the groom.  It gets me every time!  The groom almost always has this indescribable look on his face that makes my heart swell.  His eyes are wide, taking in her radiant beauty.  Usually, although he doesn’t want us to know it, he’s trying to hold back the tears.  Ladies, are you with me when I say there’s just something about a strong man crying that melts us?  He can’t take his eyes off of her as she walks down the aisle.  His love is so obvious it’s almost as if we could touch it…and we all long for that kind of palpable and overwhelming kind of love.

This past weekend at our church, I had the opportunity to serve communion to our church body.  If you’re not familiar with this, it’s a sacrament in the protestant church.  Basically that means it’s one of the ways Jesus gave us to experience Him.  Churches do this in many different ways.  Our church (Christ Church) has a loaf of bread that the servers break a piece off of and place in your hand.  This piece of bread represents Jesus’ physical body that was broken for each person that believes in Him.  Next, you dip that bread in a cup that represents Jesus’ blood that was poured out for each person that believes in Him.  Finally, you consume that soaked piece of bread.  (You can find this in several places in the Bible.  One of them is in Luke 22:19-20.)

So, I’m standing there with the bread (the representation of Jesus’ body), and there is a line of people walking up to me with open hands, waiting to receive the piece of bread.  I was doing my job well at first, tearing off a chunk of bread and telling them “This is the body, broken for you, insert-name-here.”  I’m pretty sure I was rocking it…until I wasn’t.  All of a sudden it was too much for me.  I turned into a blubbering mess, and it sounded more like, “Dis is da body, ((snub)) dat was ((sniffle)) broken for ((stifle sob)) you.”  At that point names were totally not happening.  I was just focusing on the basics here people!  I was a mess!  Seriously, at one point one of the super sweet young women in our church stopped and gave me a hug before I could get the bread to her. (Love her!)

What got me all messed up over some bread?  I’m glad you asked! 🙂  For that moment in time, God gave me a glimpse of His view.  I was standing in the “groom’s” spot, up at the front of the church, just like in a wedding.  The line of people were in the “bride’s” wedding position, walking up the aisle to me, looking at me expectantly, with their hands open to receive.  (In the Bible, the intimate relationship between Jesus and his people (the church) is described many times as a groom and bride.  I like the way the end of Isaiah 62:5 puts it, “…Then God will rejoice over you [his followers] as a bridegroom rejoices over his bride.”)  There I was, tearing and giving, tearing and giving, tearing and giving…over and over and over.  As I looked at all the open hands…different sizes, different colors, some with wrinkles, some with scars, some that I knew parts of their struggles, and some that I knew some of their joys…it was too much for me.  I was able to get a glimpse, for just a moment, of how vast God’s love for you and I is.  The only possible response was to weep.  I wept because it was so overwhelming, so beautiful, and almost unfathomable.

Just as the groom at his wedding only has eyes for his bride walking down the aisle, our God does the same with us each day that we live on this Earth.  Each day that we choose to believe His truth, accept His love and forgiveness, and take steps towards Him we are choosing to be apart of that look, that intimate gaze between bride and groom.  In that look God’s love is palpable.  It is overwhelming and all-consuming, so that none of our past mistakes matter, and none of our fears about the future are relevant.

Have you experienced that look?  That love?  Are you walking towards Him now?

Praying that right now you take a step towards Him and the unfathomable love that He offers,

“Even So Come,”originally by Chris Tomlin, but redone by Tommee Profitt & Brooke Griffith“Even So Come”

“How He Loves” done by David Crowder Band.  I recommend not watching the video on this one, but closing your eyes and letting the words sink in.  Enjoy! “How He Loves”